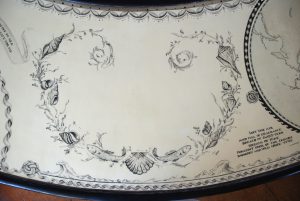 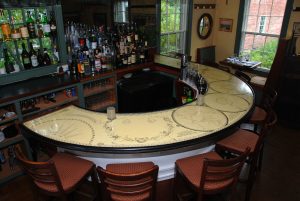 The Oran Mor Bar is done in a technique called Penwork.  Penwork is a drawing technique that has been done for centuries in Europe and Asia to emulate inlaid ivory.  After consulting with the owners we decided this was just the thing for the bar top.   This project did not however have the luxury of deliberation as the restaurant opening was looming and the concept I proposed was monumental.  Nothing new there since I do like a challange.  I began by dividing the space according to the number of seats the bar can accommodate.  I did a rough sketch and went right to it.  Everyday I would draw until I couldn’t see and then go back to the studio to design the next days work.  I had calculated on when I needed to finish so I could get enough protective coats over the work before they opened.  My cut off was Tuesday 5 p.m.  On the Friday before, I decided I needed another design element…writing.  So began my search.  It all started with a drinking poem on a 18century creamware jug.  After a little artistic licence it read front and center on the bar. Then on to a little Yeats, Mary Starbuck and I was on my way.  The quotes from Nantucket Girls Song is the one that always makes people laugh out loud.  You’ll have to visit Oran Mor on Nantucket for the full effect!  Tell the bartneder you read about it here and maybe they’ll give you a free drink.

Floorcloths are one of the greatest floorcoverings!  They can literally be any style and design and are easily maintained.  I designed 3 floorcloths for around a kitchen island, so the sizes were very specfic.  To begin the design process my launching point was a needlework sampler done by the owner.  I then took a long list of their interests and design style and set about the task of making them all work well together. The design process took a bit of time.  But its like turning on the faucet and waiting for the water to get hot.  Sometimes its faster than others.  Once the heat was on, I knew where I was going to take this.  Here the hook was the meaning of the various herbs from my clients sampler.   I then researched meanings for foods and wine and I was on my way.  I enjoyed this project because it challanged me and I always learn something new.  The little draft paintings I love as much as the floorcloths. 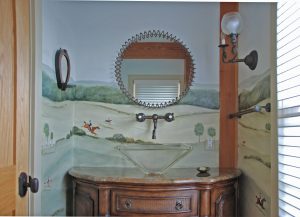 I usually approach a room such as this by first doing a scale painting.  It is at this stage where I make many decisions.  I often spend as much time at this stage as I do painting the mural.  I have found that I don’t save any time by skipping this step, as I will spend that time in the room making those same decisions.  I try to give the client as much information as possilble so that they have a good sense of how a mural will look.  I also like to use as many personal and family details as I can figure.  In the case of the Fox hunt I included the owners dogs.  One of the challanges of this room is that it was so small that it was hard to get away from my work to get a good look.  But in the end everyone will be close.